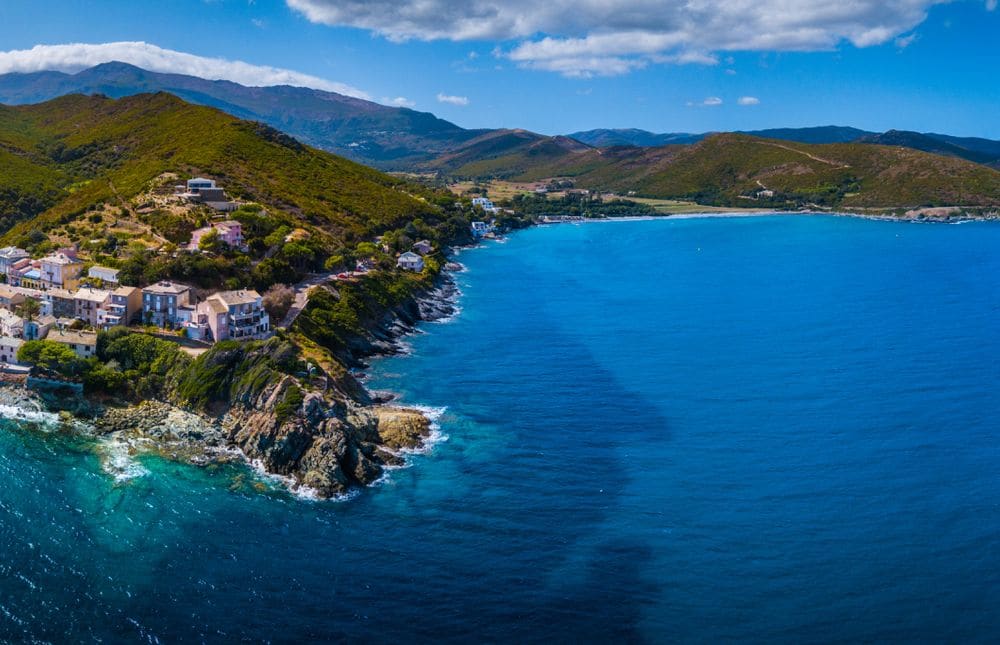 Shaped by the waves over thousands of years, the rugged French coastline offers breathtaking scenery. From the shores of Corsica to the Mediterranean or Atlantic coast, among the beaches, coves, and footpaths, gaze upon these natural treasures from the water as you take in all of the beauty…

The unspoilt shores of the Basque Country: an undulating coastline from Saint-Jean-de-Luz to Pasajes 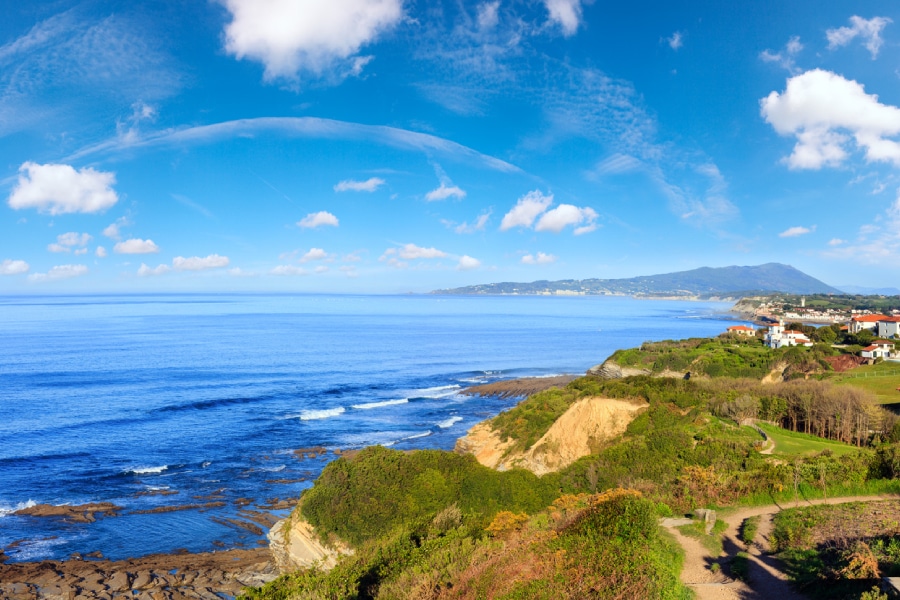 The rugged Basque coastline continues accross the Spanish border, stretching from Gornutz to Pasajes. Here, the Itzalarri peak, the rocky outcrops of Labetxu, and Las Paramoudras beach provide a stunning landscape of green and rolling hills…

The Iroise Sea: the untamed Finistère coast and the ‘end of the Earth’ islands

These rank among the most emblematic landscapes of the edges of Brittany. The major highlights are the rocky, surf-swept peaks of Ushant, the white sandy beaches of the Molène archipelago, and the chain of small islands surrounded by the cliffs of Pen-Hir (on the Crozon peninsula). In 1988, UNESCO classified part of this area as a biosphere reserve.

The unspoilt Finistère coastline encompasses both the mainland shores and those of its islands. On either side of Morgat beach, which is emblematic of the Crozon peninsula, coves emerge between two magnificent peaks surrounded by turquoise water. A few nautical miles offshore, the Glénan archipelago epitomises the island biodiversity of the region. Cormorants, shelducks, and grebes are just three of the numerous bird species that can be spotted here. Take a stroll along the shores and fine sandy beaches of this island chain and feel the inner peace…

Some hidden treasures along Brittany’s coast

Stretching over thousands of kilometres, the coastline of Brittany and the northern part of the Pays de la Loire region is full of breathtaking sites shaped by the tides, the winds, and the passing of time.

Sailors know it for its safe havens, while lovers of natural beauty come for the scenery. The Talbert Trench area is home to a regional nature reserve. With a mixture of sand and pebbles covering almost three kilometres, this stretch meets the sea, extends, and then recedes with the tides. This is a feature loved by shore fishers and tourists alike, who get to experience two different landscapes depending on the time of day. Blue thistle, sea radish, and crambe provide a colourful array of vegetation. Many migratory birds have made the Talbert Trench a traditional stopover on their long journey, much to the delight of keen birdwatchers.

On the south side, the Gulf of Morbihan’s Quiberon coast awaits you. With the waves rolling along the shores, its landscape extends over nearly eight kilometres and is full of marvellous gems, such as Percho Point or the dunes to the south of the peninsula, which appear to hang from the clifftops. 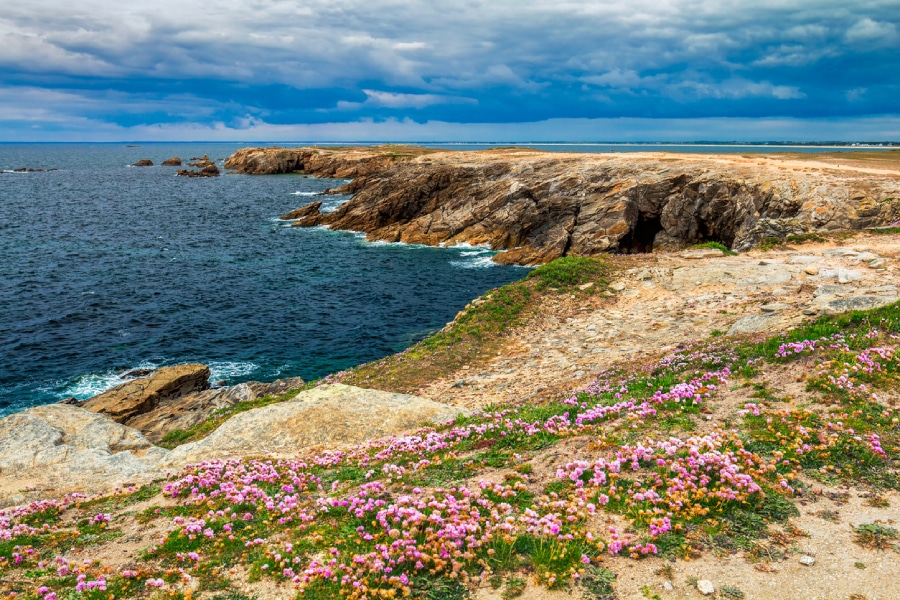 Next to the famous salt marshes is the Guérande peninsula of the Loire-Atlantique region, an unspoilt area to explore. The various coves of the coastline are home to a wide range shellfish, and the granite caves sculpted by the sea spray form a remarkable landscape. Just a stone’s throw from Le Pouliguen lies the famous GR34, also known as the ‘Customs Officers’ Path’, a walking route culminating near Mont-Saint-Michel, right on the cusp of the Normandy border.

The natural Camargue shoreline: a regional nature park opening onto the sea

The sansouires (vast grassy plains) of the Camargue region, providing a landscape highlighted by the samphire and Mediterranean sea lavender and swamped by seawater, are synonymous with this region of southern France. The Camargue seaside also boasts beautiful beaches that stretch as far as the eye can see, surrounded by dunes covered marram grass.

Among the ponds, sea, and marshes, a diverse fauna has taken up residence on this coastline; in particular, the pink flamingos, sometimes present in very large numbers on the small island of Fangassier and in the Salins du Midi, are a sight to behold. From Saintes-Maries-de-la-Mer to the Gulf of Fos, each point has natural wonders on offer: the Giraud salt marsh, the Pointe du Sablon, and Piémanson beach all host colourful untamed landscapes. 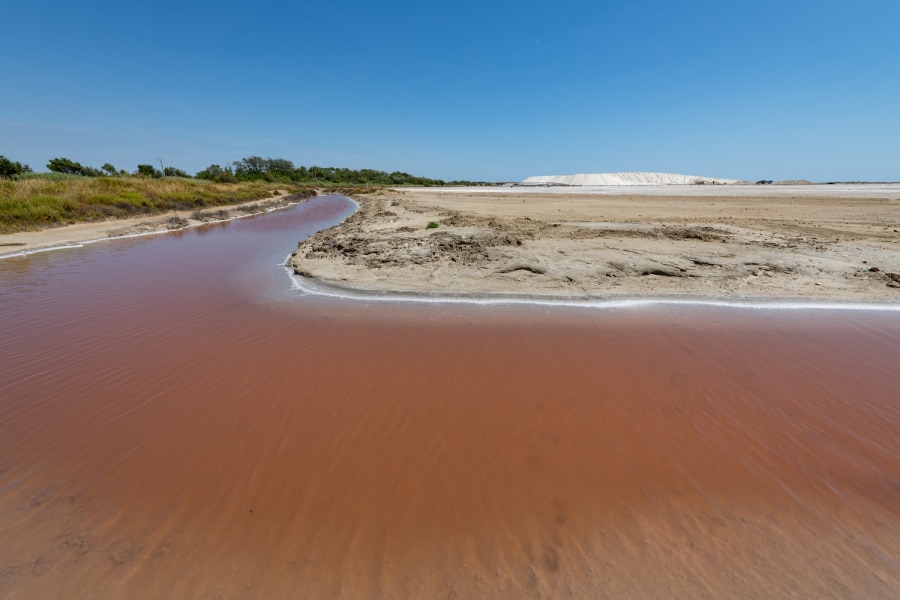 The unspoilt coastline of the Saint-Tropez peninsula and its heavenly beaches: from Cap Taillat to Pointe de la Rabiou

The scenery is known the world over following its ascent to fame in the 1950s. On the seafront, just a stone’s throw from Ramatuelle, the stunning and unspoilt landscape has established the renown of the Saint-Tropez peninsula.

Joined to the natural coastline by a sandy strip, the sumptuous Cap Taillat marks the connecting point between Briande Bay and Bonporteau Bay. The crystal-clear waters and subtle beige rocks reminiscent of the islands of the Indian Ocean offer a glimpse of the panoramas to be savoured on a cruise along the Mediterranean coastline.

The coastline gradually takes shape as it passes through Douane beach and Amour cove before reaching Bonporteau bay. This is home to Escalet beach, nestled along a natural coastline where the blue waters, terracotta rocks, and dense heathland intertwine. 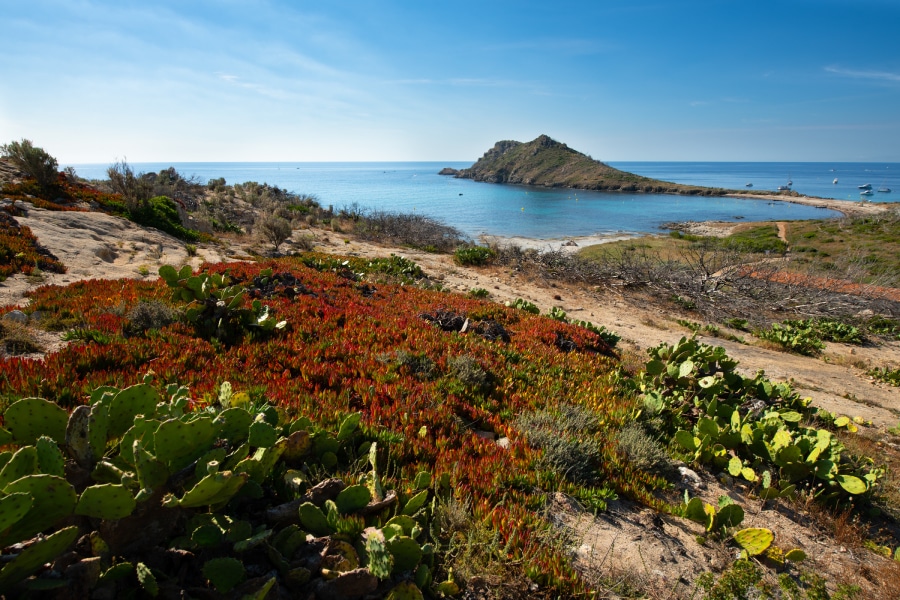 After Cap Camarat, the bay of Pampelonne emerges, boasting an immense fine sandy beach bordered by pine forests. The coast becomes a little wilder at the outcrops of Cap du Pinet. The landscape is typical of the Maures massif, with numerous folds and rifts, bearing witness to the volcanic era seen by this terrain. On the way up to Pointe de la Rabiou and Saint-Tropez, the coastal path is lined with an array of colourful flora.

The untamed coastline and heavenly beaches of Southern Corsica

In Bonifacio, the unspoilt and breathtaking surroundings of Southern Corsica unfold before the eyes of the discerning traveller. Some of the most beautiful spots of this part of the Mediterranean Sea are just a stone’s throw away. It takes just a few minutes to reach the iconic Petit Sperone beach by boat, through the translucent waters that are so characteristic of this part of the Island of Beauty.

Not too far away, two unmissable coastal sites await travellers: to the north-east of Bonifacio is the Gulf of Santa Manza, divided into two beaches (Maora and Santa Manza) by a rocky outcrop known as Punta Rossa. To the west, among the most beautiful France has to offer, is that of Roccapina, which is well worth a detour, if not a longer trip. Guarded by a granite ‘lion’ covered with the maquis plantlife, the site rivals the nearby beach of Erbaju when it comes to beauty. 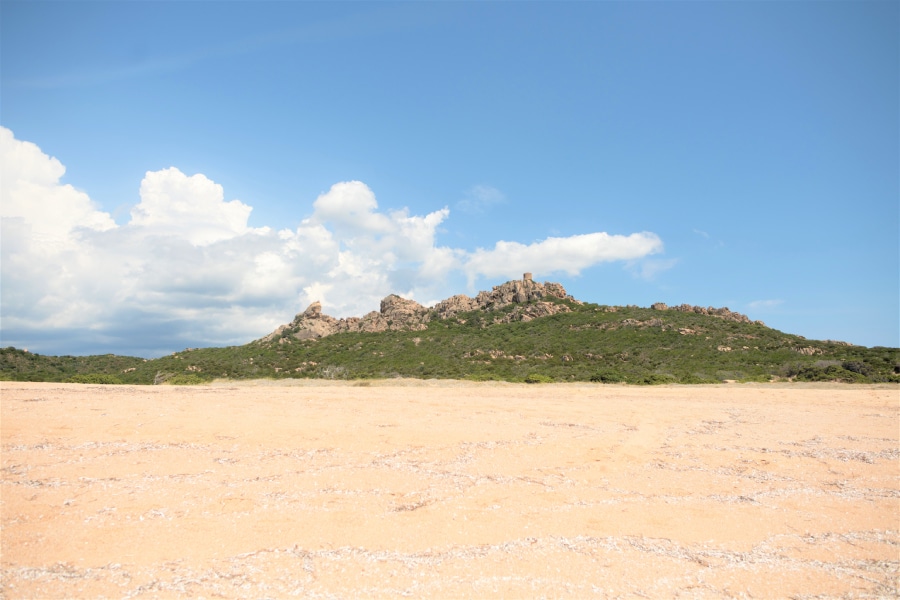 The Bonifacio coves, home to starfish, lobsters and John Dory, are well known to the local sailors. Fazzio cove, with white cliffs and a pool protected from the wind, and Catena cove, located at the gateway of the Bonifacio harbour, are easily admired from the sea.

The entire coast of Southern Corsica is home to a range of luxurious little lagoons reminiscent of the Caribbean. Highlights include Piantarella and its clear waters, perfect for warm water swimmers, Balistra beach, surrounded by small granite hills, and Rondinara bay with its crescent moon beach. Perfect if you’re looking for a real change of scenery!

The north of the Island of Beauty is home to some superb gulfs, including Revellata, not far from Calvi. Notable for its many outcrops, the very steep coastline is home to many coves and points. The waters are also home to a wealth of exceptional marine flora and fauna: red coral, gorgonian coral, groupers, moray eels, and more…

To the south-east of Cap Corse lies the Gulf of Saint-Florent, just off the coast of the village of the same name. The delights of the north of the Island of Beauty can be savoured from the sea. The sandy beaches surrounded by breathtaking mountains, rocky outcrops on the sea, and the little characteristic coves are all remarkable features of this untamed paradise! 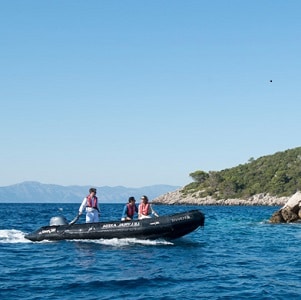 PONANT gets you there

Travel along the unspoilt French coastline